“Tenchu’s vomiting today. The second time had little spots of blood in it. Should I be worried?” 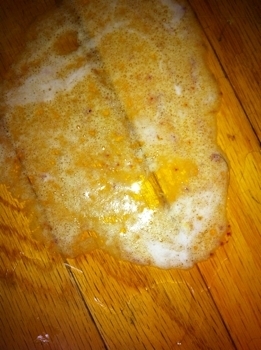 Oh oh. My belly’s not right.

Is this heartworm disease?

Remember now, he came to me as a healthy but heartworm positive dog, and I started him on a remedy the day I saw him. A single high potency dose, given March 15th. Now it’s exactly two weeks later, and Tenchu is vomiting. With blood in it.

There’s a saying from the old timers in medicine, that’s got merit for single species doctors (MD’s) and veterinarians alike:

You’ll get 90% of your diagnoses correct with a thorough history taking and a physical exam.

I’ve always loved that. It really puts the “numbers game” of lab values, measurements on ultrasound images, and CT scans into a great perspective: close observation and listening to the symptoms will almost always find the answer of what’s ailing the sick patient.

This has been true for a very long time. We’ve just lost sight of this simple fact in modern medicine.

So, in an email exchange, Scherry and I went over his recent history. Tenchu had been playing ball the day before, one of his favorite past times, with a tennis ball amid a sea of oak flowers. You have seen them and the fine yellow sheen covering everything in the Austin area lately, as the oak is “going off,” as it does each Spring around this time.

“He had a raw beef bone on Wednesday and I noticed sharp pieces of bone shards in his bed. Could he have swallowed a sharp piece?”

Q: “How long has he been eating raw bones?”

Q: “Any problems with that so far?”

Which is what I’d expect. Healthy dog, great teeth, no digestive issues, Tenchu, like most dogs, should be able to handle raw bones as a regular part of his diet. I encourage this, in fact.

Now it’s clear: this has nothing to do with his heartworm. But what’s going on is, as yet, unclear.

The distribution of the blood in the vomit was very odd: tiny pin point dots, spread throughout a lot of thick mucus. Not what you’d expect from something piercing or rubbing his stomach lining.

1:39: “He just threw up two more big patches both with many little bright red dots of blood. This time there was also a lot of thick clear mucus in it.

He still is acting fine. Tail wag. Calm but easy excitable if I ask him to go for a ride.”

After I came back from lunch obligations, there was more email: “Everyone including vets are telling me to take him in immediately for x rays and surgery if needed. I am freaking right now. He win (sic) eat. Hasn’t eaten or drank all day. I thought his appetite was fine, but he actually didn’t eat after further investigating.

2:19 His tummy is rumbling now. But no more vomitting so far and mood good. Should I do the cotton ball trick?”

No Tricks, But Time to Talk

Time for some emergency phone time. Freaking out is no good. I need to hear more to determine if there’s cause for my colleagues to be so concerned and my client to be freaked out.

Scherry tells me on the phone that Tenchu acts fine, but refuses to eat. When pushed by her, he growls at the bowl (!). No drinking either. His stomach is making noises, unusual for him.

Still thinking it’s an odd presentation for a foreign body, but it’s possible, I prescribed a remedy that Scherry gets at a local store: phosphorus 30C. This, like many remedies, can have a lot of symptoms associated with it, but a few of note that make it appropriate are:

I have Scherry mix some in water and give a small squirt every half hour for 3 doses, and then watch for Tenchu’s response.

I ask for an evening report.

7:20 pm “So no more vomiting. Drinking water again. Just had one of his raw food patties. Will limit water intake as you suggested. Will finish 3rd dose of phosphorus at 8pm. Will send more notes later tonight and tomorrow early afternoon.

Tenchu went on to need a dose or two more of his remedy, got a loose stool briefly that indicated his “offending whatever” was moving out, and returned to normal the following day. Crisis averted. Surgery avoided.

We evaluated him by phone appointment last week, to try to see what’s changed in Tenchu’s chronic disease picture. Chronic, meaning the underlying illness that allowed heartworms to get a toe hold and live in his heart. What we’d just dealt with was a superimposed “acute” illness: gastritis, likely from consuming a whole lot of oak pollen, while he played fetch.

So, how’s the big picture?

From a homeopath’s perspective, Tenchu is doing great work. He brought a symptom briefly up right after his single remedy in my office, kept it high for 4-5 days, then moved past it. It was a heartworm symptom: cough.

His cough was so incidental when I took his case, Scherry and I didn’t even talk about it. I learned last week that it had been infrequent, no big deal. But right after he had his dose of homeopathic sulphur, it increased in frequency to twice a day, 1-2 coughs per bout, and he kept it up for 4-5 days.

This is a homeopath’s dream scenario. A remedy is selected, based on the Whole Dog, and when given, it’s as if a fire was lit under the dog, “C’mon, boy, fight this disease and beat it!”

Symptoms briefly, tolerably, increase as the vital force turns up its response. Not sick, still eating, playing, and doing all his normal Tenchu stuff, but more cough. For a few days. Then gone. Or very infrequent, at least.

The rest of his symptoms center now around very external things: his skin is shedding like crazy, he’s licking his feet a lot, he’s got some circular eruptions on his left arm, and his nose is dripping.

Another clue we’re on a good road: the internal symptoms (lung cough) have given way to more external ones (itchy skin and runny nose). This is the best direction: get the inside better, the outside briefly takes up the charge, and finally, the patient is cured. Classic sign of the vital force at work.

It was clear to Scherry that he was on a plateau with these external symptoms; they weren’t trending for better in the past week. And he had a busy sleep symptom that we’d noted on his intake that had ceased while he was acutely ill: jerking, twitching, growling in his early falling asleep. And remember his vaccination history? Lots in early life. There’s a lovely left-sided vaccinosis remedy, might that appear in his analysis?

I did a brief analysis on Tenchu in my homeopathic software program, and decided on his next remedy:

Mailed it the same day, and likely Tenchu got it the following day. We’ll check him up again in 2-3 weeks and see where he’s gone.

So, ever been put in panic mode by Dr. WhiteCoat? How did you handle it? Let us know in the comments. No judgements, it’s just good to know you’ve not been alone.