Callie died, with the help of the euthanasia solution she got from the conventional vet on Friday. She had rectal cancer, and I came on the scene back in November, with hopes that homeopathy could do for her what it did for Blueford, the Blue Tick Hound a couple years back: Made it Go Away. It’s. Still. Gone.

But Callie wasn’t Blueford. She was Callie, and everyone is different. That’s what makes veterinary homeopathy both interesting and difficult. It’s never One Size Fits All. Or The Remedy for This Disease Is ______.

It’s, rather, Find the Remedy for ______ (fill in patient’s name here). END_OF_DOCUMENT_TOKEN_TO_BE_REPLACED

I saw my canine patient Caleb again this week, a few weeks after I’d given him one dose of a homeopathic remedy for vaccinosis. His story is typical, so very worth sharing. (If you missed his great smiling face, just back up a post).

Caleb had come to me then because he was exhibiting tumor growth on his body, most notably a small-orange-sized lump right on the center of his sternum. He’d had several past ones removed and checked, but luckily none were malignant.

He had also been on Rimadyl since he was hit by a car at 2 years old, and Caleb is now 11 years old, and a pretty big guy, a mix of probably Pit Bull and Queensland Healer, running about 68 pounds. His owner, Catherine, recognizing the risks associated with this drug, had taken him off it about a week before I saw him. Interestingly, his liver checked out fine in blood tests done prior to my seeing him. (Deaths due to liver failure have been caused by this drug. Search it out.)

So, after a lengthy questioning of his owner and a physical exam, here’s my list of what struck me about Caleb, things I asked Catherine to follow as we headed into homeopathy to help him heal himself:

So, in comes Caleb on Wednesday, looking like a happy camper, and Catherine tells me the great news:

So, we’ve still got some work to do, but my goodness, what a neat turn around for an old guy, right?

What did he get treated for? Vaccinosis (click here for more info). The illness of being vaccinated, and he got plenty of vaccinations, as do most pets and horses today. When the postcards came saying he was “due for his shots,” his owner dutifully complied. Yearly, until she stopped in the past year, thinking (rightly so!) he’d had enough.

So, think along with me:

We’re going for a more constitutional remedy now, to see if we can take him further, which I’m confident we can. But Caleb’s story is worth spreading around, I think. So here’s Caleb, smiling at the world, and telling it like it is.

Thanks for joining me in this adventure called veterinary homeopathy.

P.S. For the budding homeopaths in the readership, the remedy given was thuja 10M, one dose.

Now, for those looking for shortcuts, I’ll mention that there are lots of remedies for vaccinosis, and they won’t work the same in every individual, so this kind of prescribing, for chronic disease, is best not done at home. Seek out a professional homeopathic vet, trained, and ideally, certified in homeopathy. Lists of them are on the AVH site, which is referenced on my Resources page.

This is Caleb, a “senior” patient of mine, who’s not acting like a senior any more. Why? I’ll tell you this weekend, it’s a great story. 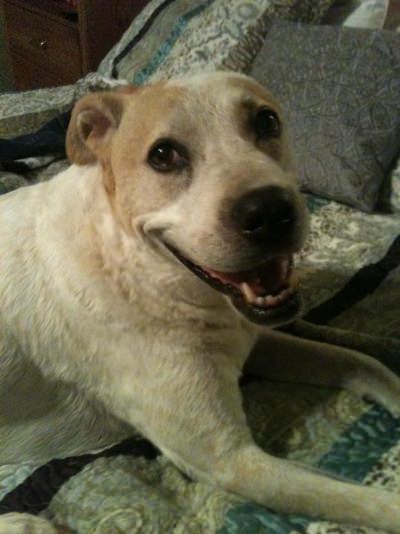 Hint: he had a very common disease that starts with “v.” Lots of animals have it. Caleb lost his, and got really playful.